The “perfect” cuppa: What’s your tea ritual for the best brew?

In what order do you tend to make your cup of tea – mug, tea bag, boiling water, add sugar, pour in milk, remove the teabag and drink?

The topic of when to add milk to a cup of tea has been hotly debated for years. “Miffy’s” argue that milk should come before boiling water, whereas “Tiffy’s” insist that hot water should be steeped into the mug first.

We could whittle it down to a matter of personal preference. However, new research by Leeds University’s Head of School Of Food Science & Nutrition, Professor Alan Mackie, revealed that pouring milk on a teabag before adding boiling water could improve the taste of your “cuppa”. 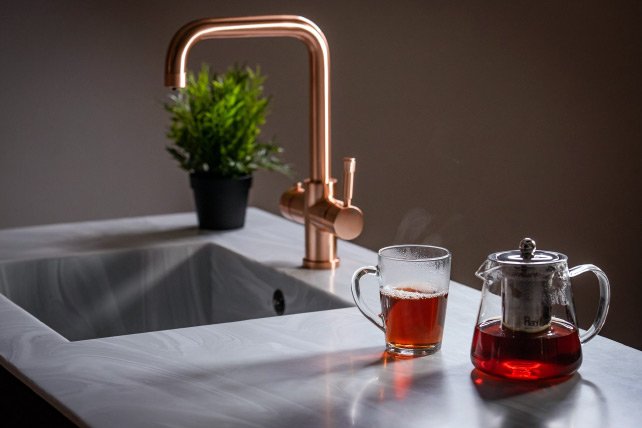 In some respects, making a cup of tea is a sacred ritual for Britons, so Professor Mackie’s findings may have come as a surprise for our tea connoisseurs.

Prof Mackie insists that when pouring in milk before adding boiling water, the tea’s flavours are enhanced – especially if you have hard water as the minerals in this type of substance can prevent flavour compounds from forming together.

His research found that more than half of the British population make their “cuppas” the traditional way, and by steeping a tea bag in hot water before adding milk, they are thus marring the taste of their brew.

Professor Alan Mackie said: “Adding milk at the onset of the steeping process allows the proteins in the teabag to bind to the tannins and other minerals in the water – preventing them from turning solid – which in turn gives you a far superior flavour.”

We asked Kulvinder Tank, Director of Fahren UK Instant Boiling Water Taps, for his opinion on the topic and what makes the perfect brew.

Is there a “perfect” way to customise a cup of tea?

KT: “It’s down to preference but shining a light on the research conducted by our nation’s food and nutrition expert – achieving the perfect brew remains a distant dream for many.

“I have no complaints about the traditional way of making a decent cuppa, but Fahren is delighted to offer insight into how tea-lovers can enhance the flavour of their brew and counter the impact of hard water.”

How long should you keep the teabag in the mug before removing it?

KT: “Well, tea needs time to unlock its flavour, so after steeping in hot water, you should wait 3-5 minutes before removing the teabag to extract the flavour – also the perfect amount of time to sneak in a bite of a biscuit.”

Is it true that you shouldn’t make it a standard practice to reboil water?

KT: “Boiling water once, letting it cool and reboiling it does not pose a significant health risk, but it’s best if you don’t make it a habit as this could change the chemical compounds in the water.

“Fahren’s Instant Boiling Water Taps maintain the temperature of boiling water without posing a health risk, meaning homeowners can enjoy the luxury of hot water at the push of a button.

“Our 4-in-1 Instant Boiling Water Taps are also capable of producing filtered water and therefore remove the impurities found in common tap water.”

What type of Instant Boiling Water Taps are on offer?

“Fahren’s boiling water tanks also come with a filtration system, manufactured from the highest grade of material and a touch-sensitive LED display for temperature control.”