Want hot drinks in an instant and more surface space for your kitchen appliances? Swap your kettle for a boiling water tap and enjoy the luxury of instant hot water.

Instant boiling water taps are becoming increasingly popular across the UK and overseas and are an innovative way to optimise kitchen space in a subtle but sleek manner.

There are also several options available, depending on whether you want hot, cold, filtered or boiling water at your fingertips.

With this complete guide, we’ll walk you through the types of instant boiling water taps, covering installation, cost and benefits to ensure you can find the perfect one for your kitchen. 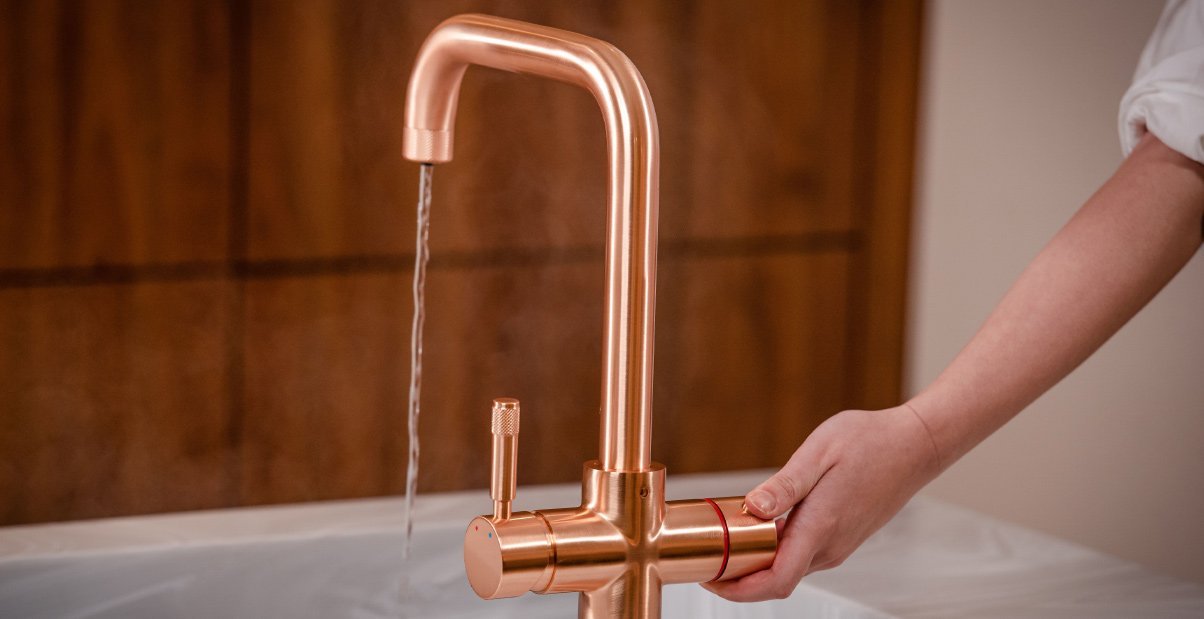 Boiling Water Taps function in the same way as regular taps but with the added capability of providing homeowners with instant hot water at the push of a button, instead of waiting for a kettle to boil or a saucepan to heat up.

The taps are connected to a compact tank fitted underneath your sink, hidden out of view and linked directly to your water supply.

As the tank maintains the temperature of boiling water, hot water is dispensed instantly from the tap when required.

The installation process for Boiling Water Taps is relatively straightforward and should take no longer than an hour to fit.

Instant Boiling Water taps are installed in the same way as standard taps, with the addition of the water tank underneath the sink. While the tank will have to be connected to your electricity mains, it’s unlikely that you’ll need an electrician to help fit the system; a plumber should be sufficient.

However, if you’re considering getting an instant boiling water tap fitted, you’ll need to ensure that you have electricity sockets nearby and space for the tank, which tends to be installed beneath the sink.

What’s the average temperature of an Instant Boiling Water tap?

However, “ideal” is subjective, and water boiled around anything above 80ºC is considered acceptable for domestic use.

As the water is boiled in a compact tank, at 100ºC, a significant majority of the water would be converted into steam, which would make the tap less efficient.

There is also a consensus that hot drinks, such as tea and coffee, should not be prepared with water at 100ºC as it would mar the taste.

How much are Instant Boiling Water Taps?

Considering making a subtle innovation to your kitchen by purchasing an Instant Boiling Water Tap?

You’ll be delighted to know that these taps are marketed at different prices, with some more affordable than others.

While they are more costly than regular taps, in the long-run Instant Boiling Water taps can work out to be more cost-effective due to their multifunctionality and ability to provide water at the temperature you require instantly.

Unlike kettles, Instant Boiling Water taps also have childproof safety functions and offer advantages to those who have difficulty lifting and pouring conventional appliances.

There are boiling water-only taps and others that offer combinations of hot water, filtered water and cold water to cater to your needs.

If you only require boiling water, this tap – which a plumber can install alongside your existing faucet that continues to provide hot and cold water – could be perfect for you.

An innovative design that allows you to dispense hot, cold and boiling water from a single tap. The 3-in-1 tap is popular in households due to its multifunctionality as it prevents homeowners from having two faucets in the kitchen.

If you don’t want to stash bottles in your fridge or on workspaces, 4-in-1 boiling taps offer the perfect solution. These taps can dispense hot, cold, boiling and filtered water, and as only one tap is needed, it provides a sleek finish to your kitchen.

What colours do Fahren have in their collections?

Fahren has a fantastic range of colours which complement any type of kitchen. Please browse our:

What are the advantages of using an Instant Boiling Water Tap?

While you may think that having boiling water dispensed from your tap is dangerous, all boiling water taps come fitted with a range of safety measures.

Instant Boiling Water Taps can also feature cool-to-touch spouts to prevent you or other members of your family from scalding themselves when accessing the sink.

Furthermore, the pressure system in Instant Boiling Water taps is slightly lower than standard faucets to prevent the dispensed water from splashing up and burning the user.

Installing an Instant Boiling Water Tap in your home could also reduce your water bill and help conserve energy as you only use the exact amount of water required. According to a recent study, more than 60% of people overfill kettles with each use, resulting in approximately 3500 tonnes of wasted energy each day.

Boiling Water Taps also come fitted with filters to help reduce limescale build-up, providing you access to cleaner, purer water than your kettle. While these filters will need to be changed, each one has an average lifespan of 3 to 6 months before being replaced, depending on the water hardness level in your area.