The UK is lucky to have access to some of the safest drinking water globally, thanks to rigorous standards applied to piped water.

However, we’re far from perfect.

It’s safe to say that we’ve become a house-proud society following multiple lockdowns, and aspects of the house that would usually go unnoticed, such as the quality of drinking water, have become a priority.

According to research by Thames Water, more than 60% of people in the UK live in hard water areas, with London known for having some of the hardest water. 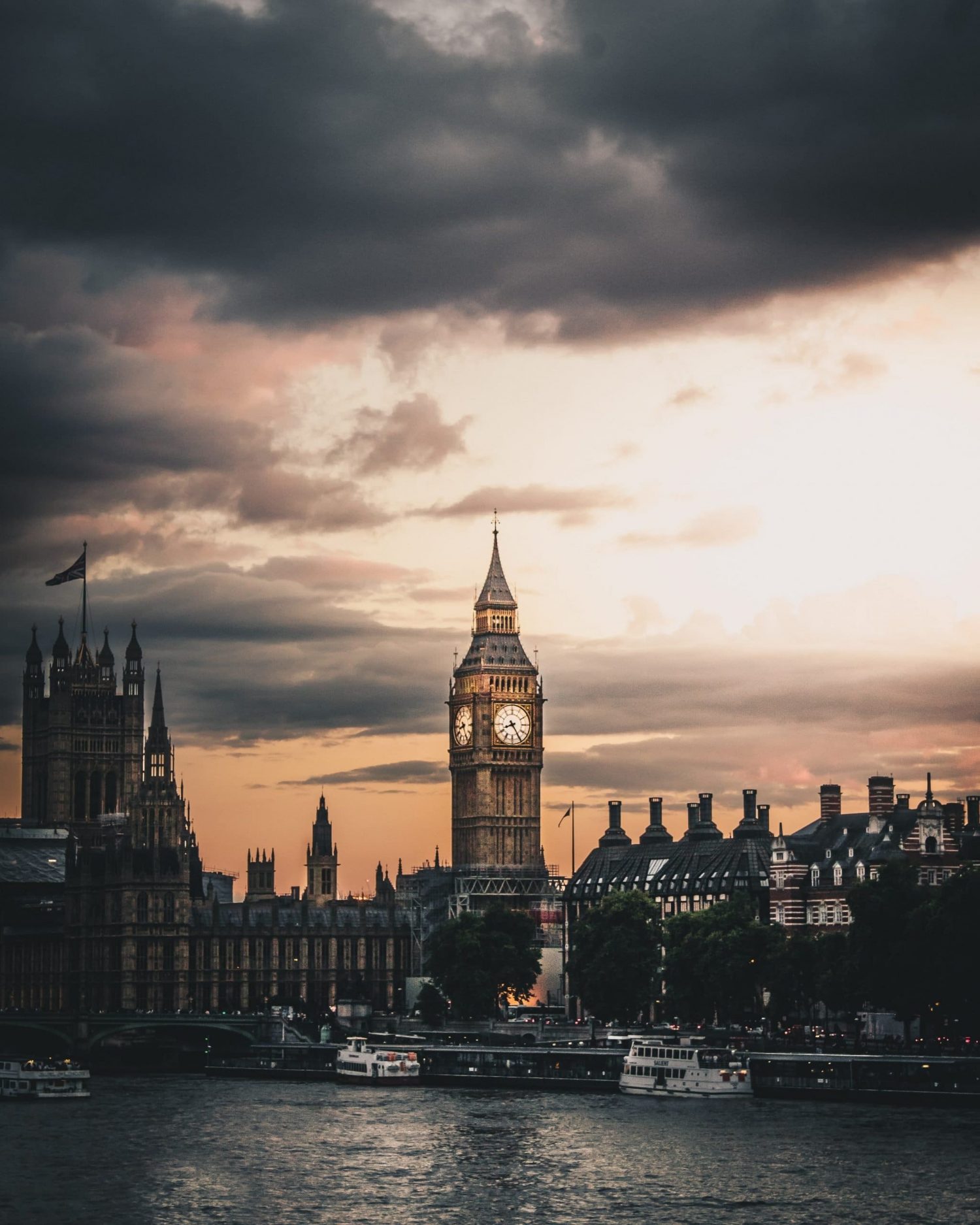 While hard water isn’t a health hazard, it can have a massive impact on your home and health. Besides the bitter taste it leaves in your mouth, it can spell trouble for cleaning, fertility and personal hygiene.

So, can you drink London tap water? How can you protect yourself and your home from the effects of hard water? Here’s all you need to know:

Technically, London’s drinking water is safe to drink as it meets the water quality standards.

However, many Londoners claim that their water tastes “bitter” and are hesitant to drink from their taps.

Drinking water in London may taste “bad” or “bitter” due to the chlorine used to disinfect the water or because hard water contains high concentrations of dissolved minerals, namely calcium and magnesium.

When water falls onto the ground, it is naturally soft. However, water that lands in areas made by porous rock such as limestone absorbs the minerals in the rock, which remain in the water dispensed from household taps.

According to Thames Water, 65% of London’s water comes from local rivers and 35% from natural underground reservoirs, meaning it passes through sedimentary rock several times before entering taps in the capital.

On the other hand, rain that falls in non-porous rock areas like Wales and Scotland remains soft. A recent study by Homecure Plumbers  revealed that cities in the South West, such as Devon and Plymouth, and north of England, including Greater Manchester and York, have the softest water.

Tap water in London is hard; however, the severity of hardness varies throughout the capital.

According to research conducted by Harvey Water Softeners, the ten areas in London with the highest severity of water hardness are (readings based on parts per million):

The Effects of Hard Water on Health

While there are no severe health issues associated with hard water, it can wreak havoc on our skin and hair by weakening the barrier against harmful bacteria.

As hard water contains a high percentage of dissolved minerals, it doesn’t effectively break down soaps and other cleaning products, making it difficult to remove dirt and bacteria from skin or hair when bathing.

The film left on the skin or hair from hard water also makes it difficult for moisture to penetrate, which can cause dry skin and scalp, clog pores or give rise to conditions such as dandruff, dermatitis, acne and eczema.

If you live in London or another hard water area, you might also notice your hair become dull, unmanageable and prone to breakage.

Hard water can also affect household appliances as the build-up of minerals can clog water lines and plumbing, reducing the efficiency of appliances and resulting in potentially expensive replacements.

In recent years, concerns have also been raised about the percentage of oestrogen present in tap water. Although the UK’s treatment process is one of the best in the world, it is difficult to remove oestrogen from water, meaning traces of the hormone can end up in tap water.

Too much oestrogen can lead to minor health issues such as acne and constipation, or more severe conditions such as infertility in men, poor bone growth, blood clots and breast cancer.

How to Treat Hard Water Problems

The most effective way to protect hair and skin from water hardness is to install a water softener. Alternatively, use apple cider vinegar rinses to help remove calcium build-up from hair and replace shower gel or soap with creams and moisturise the skin regularly.

You could also install a water softener in your kitchen tap; however, a safer and more permanent solution would be to install a boiling water tap. Unlike water softeners, Instant Boiling Water Taps contain filters that target contaminants and remove impurities.

Most boiling water taps come fitted with filters that reduce limescale build-up to extend the lifetime of your appliance and give you access to cleaner, great-tasting water.

While you will need to replace the filters, the average lifespan is 3-6 months, so you don’t need to worry about forking out money to purchase one every month. Fahren UK boiling water taps also come with a built-in filter life indication system to save you the hassle of remembering when to change the filter. 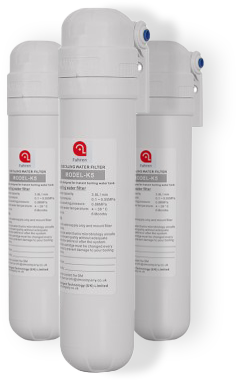 There are various boiling water tap models available on the market.

At Fahren UK, we offer instant boiling water taps in the traditional swan neck and a more contemporary square neck design. Both designs are available in six different colours, ranging from the sophisticated matte black to the on-trend rose gold, and all come equipped with the Dual Action Calcium and Carbon Water Filter. 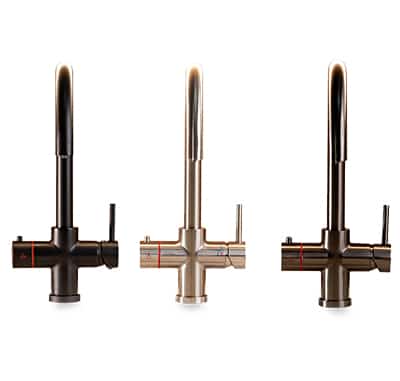 What are the Benefits of Filtered Water?

Given that our body relies on water more than it does food, it is important to ensure we drink clean water.

Here are the five primary benefits of filtered tap water:

Using a boiling water tap or tap filter to obtain clean water is cheaper than purchasing bottled water and more environmentally friendly. Furthermore, most bottled water is filtered via a tap, so you’re essentially paying for the plastic.

Boiling water taps have the additional benefit of streamlining your kitchen surfaces by eliminating the need for a kettle.

Filtered water removes harmful bacteria and potentially dangerous contaminants, byproducts (such as chlorine) and metals, such as lead, from your tap water.

Lead is a hazardous metal that has been banned from UK plumbing for more than 25 years. While it is rarely found in natural water sources, Homecure Plumbers found higher than average metal concentrations in London.

Filters also ensure that healthy minerals such as zinc – which helps your immune system and metabolism function – are retained in the water.

The easiest way to remove impurities and improve the taste of your drinking water is to install a water filter or swap your existing taps out for a stylish boiling water tap.

In London, tap water is strongly associated with smelling like chlorine and tasting “bitter”. However, as filters remove contaminants while retaining healthy minerals, this improves the flavour and smell of water, resulting in a more refreshed experience.

The most notable health benefits associated with drinking filtered water are:

According to science, filtered water is the cleanest that children can drink.

Pregnant women will also benefit from filtered water as it reduces the risk of common pregnancy issues such as constipation and bladder infections, and birth defects in the child.

For many parents, getting their children to drink water can be challenging. With a filter, you can encourage your child to drink more water at home without worrying about potentially harmful bacteria in the water. In addition, as the filter improves the taste and smell of water, this could also help boost their intake.